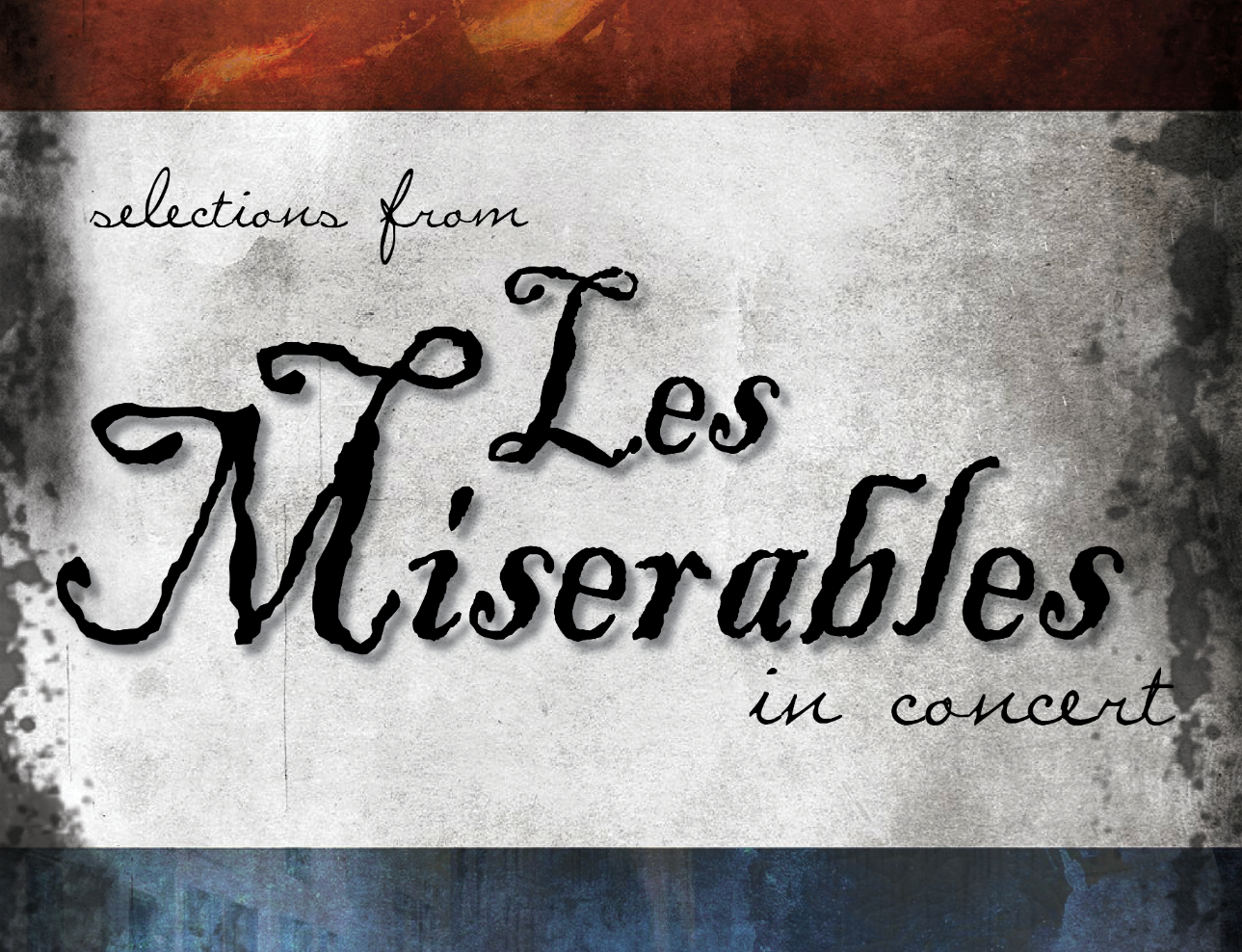 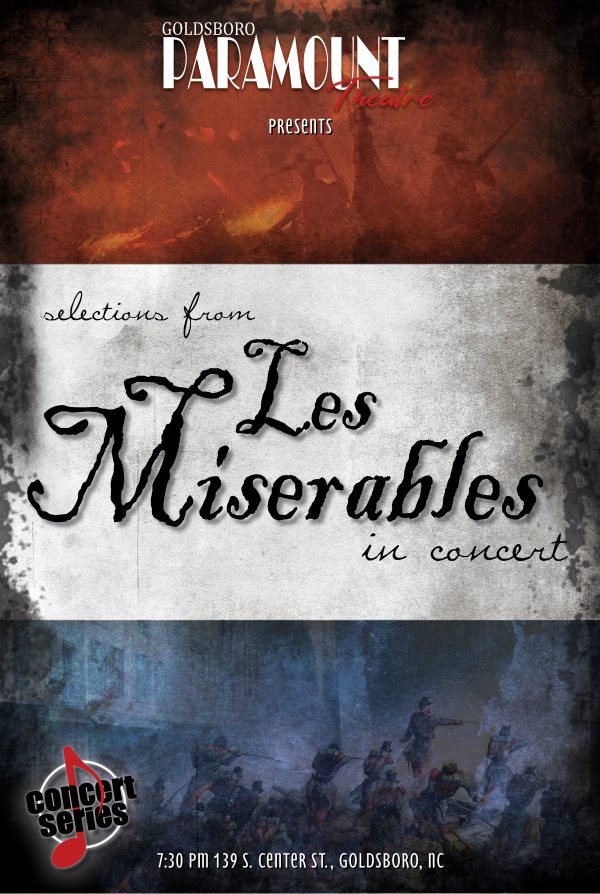 While covid-19 has forced the temporary closure of theatres throughout the Country, the Paramount Theatre has been developing an outstanding series of one-act concerts drawn from popular Broadway musicals. These shows are uncompromisingly excellent, while being rehearsed and performed with stringent safety measures in place. This makes for a wonderful night out and your pre-purchased tickets include an array of individually packaged “grab-and-go” concessions that can be taken into the theatre, where folding seat-trays are available. Tickets are limited to permitted audience capacities, so visit us online to secure yours!

1815 France, a prison camp (“Prologue: Work Song“). After 19 years Jean Valjean, “prisoner 24601,” is released on parole by prison guard Javert. As a convict, Valjean is shunned wherever he goes. When the Bishop of Digne offers him food and shelter, the desperate and embittered Valjean steals the Bishop’s silver and flees. Captured once again by the police, the Bishop tells them the silver was a gift to Valjean and adds a pair of precious candlesticks. The Bishop then tells Valjean that he must use the silver “to become an honest man”. Ashamed and humbled by the Bishop’s kindness, Valjean resolves to redeem his sins (“Soliloquy/What Have I Done?“). He breaks his parole and flees, giving himself a chance to start a new life free from the stigma of his criminal past.

Eight years later, Valjean has achieved success under a new identity: Monsieur Madeleine, a wealthy factory owner and mayor of Montreuil-sur-Mer. Fantine, an impoverished woman working in his factory, is a single mother desperately trying to support her daughter, Cosette. When she rejects the advances of the foreman, he uses her being an unwed mother as a pretence to fire her, a cruel act that Valjean unwittingly condones (“At the End of the Day“).

Fantine reflects on her broken dreams of happiness with Cosette’s father (“I Dreamed a Dream“). Weak, ill, and desperate for money to raise Cosette, she becomes a prostitute but fights back against an abusive customer with the last of her strength. Valjean, passing by the scene, pities Fantine, then recognizes his own role in her misfortune and is guilt-stricken. As she lies dying, Valjean promises to find Cosette and protect her.

Javert, now a local police inspector, arrives on the scene. He has pursued the fugitive Valjean these many years, but until now had not recognized him in this upstanding citizen. The suspicious Javert tells him of a man imprisoned for Valjean’s crimes; although this case of mistaken identity could free the real Valjean forever, he is not willing to see an

innocent man falsely imprisoned and confesses his identity (“Who Am I?”). Valjean then asks Javert for time to fetch Cosette as he had promised. Javert refuses and they struggle, but Valjean overpowers Javert and escapes (“The Confrontation“).

The vile innkeeper, Thénardier, and his wife had offered to raise Cosette (for a price) alongside their own daughter, Éponine, but instead use her as a servant and treat her cruelly. (“Master of the House“). Valjean offers the Thénardiers payment to adopt her and the two leave for Paris.

Nine years later, Paris is in upheaval. Among those mingling in the streets are student revolutionaries, including Marius Pontmercy and the Thénardiers’ daughter Éponine, who is now grown and has fallen in love with Marius (who is oblivious to her affections). Cosette, living a quiet, privileged life in Paris with Valjean, runs into Marius, and the pair fall in love at first sight. Javert, now an inspector stationed in Paris, recognizes Valjean, who once more makes his escape. Javert makes a vow that he will recapture Valjean (“Stars“).

In a rare selfless act, Éponine leads Marius to a garden where he and Cosette confess their mutual love. Heartbroken for her loss, but happy for her two friends, Éponine can only look on (“A Heart Full of Love/In My Life“).

On the eve of the 1832 Paris Uprising, Valjean prepares to go into exile; Cosette and Marius part in despair; Javert reveals his plans to spy on the students, and the Thénardiers scheme to profit off the violence. The revolutionaries anticipate what the dawn will bring (“One Day More“).

As the students build a barricade to serve as their rally point, Éponine has disguised herself as a boy to join the rebels. As she walks the streets of Paris alone (“On My Own“), she is shot by soldiers crossing the barricade. Marius finds and tearfully holds her; she dies in his arms, redeemed of her sins (“A Little Fall of Rain“).

Valjean arrives at the barricade to support the cause and ends up freeing the imprisoned Javert, who had been found out as a spy; as soon as the two are alone Valjean shows mercy and frees Javert. The battle rages on and Valjean prays to God to protect Marius, (“Bring Him Home“). As dawn approaches, everyone at the barricade has been killed except Valjean who, carrying a gravely wounded Marius, escapes, only to find Javert waiting for him. Valjean begs for one hour to bring Marius to a doctor; when Javert reluctantly agrees, he finds himself unable to reconcile Valjean’s merciful acts with his being an irredeemable criminal. Torn between principles he is unable to reconcile, he commits suicide by throwing himself into the Seine (“Javert’s Suicide“).

In the wake of the failed revolution, Marius despairs at the death of his friends and sees that their sacrifice was for nothing (“Empty Chairs at Empty Tables“). Valjean, realizing that Cosette will no longer need him as a caretaker, gives the two his blessing and quietly departs to live his final days in prayer.

As he prepares to die, the spirit of Fantine appears to Valjean, telling him that he has been forgiven and will soon be with God. Having learned of his selfless acts that saved both of their lives, Cosette and Marius arrive to find Valjean near death. He gives Cosette a letter confessing his troubled past and the truth about her mother; as he dies, the spirits of Fantine and Éponine guide him to Heaven, noting that “to love another person is to see the face of God” (“Epilogue”). Their voices are joined by those of the spirits who died at the barricades, (“Do You Hear The People Sing?“).

This Tony award-winning show, based on Victor Hugo’s timeless novel of love and salvation, follows the life of fugitive Jean Valjean as he seeks moral redemption in pre-revolutionary France.  A long-running Broadway classic, Les Miserables remains among the world’s most beloved musicals.